Every data controller and processor (i.e., data holder), who collects or processes the personal data of European citizens (i.e., data owners) should be aware of the exact meaning of these concepts in order to be compliant with the GDPR and avoid hefty fines posed by the regulation.

Aside from legal compliance, there are at least two other good reasons for any data holder to protect personal data. First, privacy protection is a competitive differentiator for companies which has also been recognized by several large corporations recently, such as Apple. Second, privacy scandals can cause serious reputation loss as shown by the notorious cases of Equifax, Yahoo, Ashley Madison, and many more. With the GDPR, such cases will not only result in PR disasters but also in paying severe fines.

We show that identifying personal data is not straightforward. In technical terms, it’s almost impossible to say that certain type of data is “perfectly anonymized and hence non-personal” or that it “doesn’t share anything about the religion or sexual orientation of a particular individual”.

Removing obvious direct identifiers like personal names, e-mails, social security numbers, or bank account numbers is not enough to get rid of personal data and the legal obligations stipulated by the GDPR. Similarly, the decision of whether a type of personal data is sensitive or not is often ambiguous, an example that was demonstrated recently when sexual orientation was predicted from facial photos.

Personal data in the GDPR

At first sight, Table 1 contains personal data due to the names stored in every record. However, this is not always the case as there can be several natural persons with the same name in a population (e.g., in a city) but not all of them are included in the dataset. For example, if there are several persons named John Smith in NYC, then Record #4 may not be personal data, if the attackers accessing the dataset cannot single out the flesh-and-bone individual from the population who Record #4 is about.

On the other hand, a dataset which does not contain personal names can still be personal. For example, consider an attacker who has access to Table 2 as well as Table 3, where the latter contains some demographic data of people including the patients in Table 2. The attacker can see that there are three individuals named John Smith in NYC, who are aged 26, 35, and 65, respectively. Therefore, Record #4 in Table 2 belongs to Record #3 in Table 3, since Alzheimer is very rare in age 26 and 35.

Table 3. All people in a city

The above toy example contains only a few attributes of individuals like name, hometown, and diagnosis. However, this is rarely the case in practice. In the era of “Big Data”, most datasets contain many different attributes of individuals, such as the list of visited locations, purchased items in a store, credit card transactions, or the watched movies per person, just to name a few. The multitude of stored attributes about a person is detrimental to their privacy because their record is likely to be unique in the dataset. This potentially makes them easily re-identifiable.

So, is this transactional data personal according to the GDPR? It is, if any record owner is re-identifiable, i.e., a re-identification attack is (1) likely to happen and (2) also likely to succeed. Specifically, the attack must have reasonable (1) plausibility (e.g., is it plausible that the attacker can access the transactional dataset and know John’s 4 transactions?) and (2) success probability (e.g., does only John’s record have these 4 transactions? That is, can the attacker find John’s record in the dataset?). The last question has been answered in a study showing that 4 transactions make a unique record with a chance of 90% in a dataset of 1.1 million individuals.

The first question is much more difficult to answer as no one can argue what an attacker might already know about John from other sources that may be seemingly unrelated to the transactional dataset. Intuitively, learning four transactions of an individual should be easy, as people share a lot of information about themselves through social media – perhaps John shared his favorite stores or photos about his recently purchased products. In fact, such data sharing can also happen involuntarily. For example, web-trackers and data brokers constantly collect the list of visited web pages of people using web cookies or other means of tracking. The collected web-history of a person can be easily linked to his offline purchases as many people first check current deals online. Therefore, an attacker can associate a web history with a transactional record if it has access to both. This is not a far-fetched scenario; obtaining web-histories of millions is seemingly easy, and re-identification becomes straightforward when a person’s web history contains his public Facebook or Twitter profile.

The above example shows that not only hometown or birth date can be identifiers but also credit card transactions. Besides, researchers have shown that 6-8 movies that a person watched can also serve as an identifier in a dataset of 500k Netflix users. For re-identification, the data records can be linked to IMDB where the same individuals often review the same movies but using their real names. Similarly, it has been demonstrated that 5-7 laboratory tests of a patient can be an identifier with a probability of more than 95% among 61K patients depending on the test. Moreover, the list of visited web pages or simply the list of installed apps on a smartphone can equally be identifiers of anybody in a large population.

The GDPR’s definition of personal data is very general and includes many kinds of information which may seem non-personal at first sight. These are not necessarily “structured” or relational datasets like the ones above. For example, an article saying, “A person sells his Mustang in Innsbruck” can be personal data especially if there is only a single person in Innsbruck who has a Mustang.

The source code of a software can be personal data, even without direct authorship information, as the coding style is often unique to a developer. Likewise, reviews about a product made under a pseudonym can still be attributable to the real author due to his/her unique writing style. Medical data like screening images and drug prescriptions can also be personal if there is only a single person in the population who takes the prescribed combination of drugs or has a unique skull shape on a CT scan. Statistical (aggregate) data can also be personal; for example: publishing only the total number of visitors of some locations in a large city in every half an hour allows to reconstruct the individual trajectories of people.

Of course, in order to be personal, the above “pseudonymous” records must be associated with their real flesh-and-bone owners. Indeed, one must argue that there is a plausible attacker who has access to the data above and also knows enough to link individuals to their data. This can be quite easy as people often share pieces of these data publicly elsewhere (without being aware of the potential privacy implications); the Mustang owner can share a photo of his car on Facebook, the developer may publish open source code on GitHub with his real identity, the head shape of a person might be approximated (perhaps soon) from his/her Instagram photos using sophisticated machine learning techniques. Matching these shared pieces (and the corresponding online profiles) with the “pseudonymous” records above, the attacker can easily reveal the real identity of data owners.

Sensitive data in the GDPR

Sensitive data can be defined as personal data that reveal any racial or ethnic origin, financial status, political opinion, philosophical belief, religion, trade-union membership, sexual orientation, or concerns health and sex life, genetic data, or biometric data. It is a special sub-category of personal data which enjoys extra consideration and protection in GDPR as they may give rise to strong stigmatization or discrimination in society. Many people (falsely) think that GDPR addresses only sensitive data. For GDPR, personal data is ANY information that is attributable to a specific individual independently of the nature of the information.

Nevertheless, the distinction between sensitive and insensitive data can be at least as blurred as between personal and non-personal data. For instance, recent research claims that it is possible to predict sexual orientation from facial photos with a confidence of 81%. So, should facial photos be sensitive? Technically, it depends on the confidence of the prediction. Is electricity consumption sensitive? It can be, as the consumption is often shaped by religious activities (e.g., Jewish people consume less electricity on Sabbath). Is a video about a person sensitive? It can be, as one can compute the pulse rate from the variation of skin color using sophisticated image processing techniques, and abnormal pulse rate can be a precursor of many diseases.

According to the GDPR, all these data reveal information about a person’s health, sex life, or even religion, hence it should be considered as sensitive. We still need to wait and see how this legal definition will be interpreted in practice.

It’s worth noting the difference between confidential and sensitive data. Confidential data is a broad categorization of any information of commercial value in which disclosure, alteration or loss could cause substantial harm to the competitive position of the data holder. Consequently, confidential data includes much more than personal data.

For instance, all contracts, accounting information, business processes, and operations, or even source code should be regarded as confidential data in almost all organizations. Confidentiality is mainly attributed based on the potential harm caused by the unauthorized manipulation of the data to the data holder (and not to the data owner). The relation of personal, sensitive and confidential data is illustrated below. 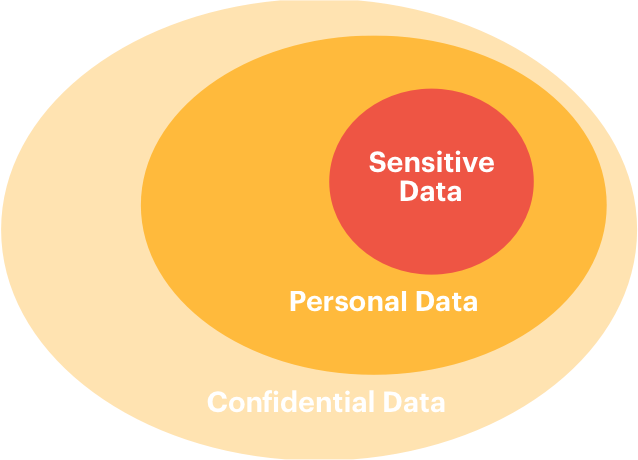 First, people share a lot of personal data about themselves willingly or unwillingly which makes linking their real identity to their „pseudonymous” data easy. Second, rapidly developing AI technologies always reveal new, surprising relations between seemingly unrelated information like facial photos and sexual orientation. Some data which seem non-personal/insensitive today may turn out to be personal/sensitive tomorrow.

Interested in how encryption helps you protect personal data?