Tech giants have an uphill battle ahead of them as results from a YouGov survey* commissioned by Tresorit show the current status of consumer trust in online services in the US and in the UK. Interestingly, over 40% of those surveyed do not have faith in companies like Amazon, Google, Facebook, Instagram and Apple to lawfully manage their data while a whopping two thirds feel their personal data held by online services and social media platforms is at risk from hackers.

With high-profile data breaches like 50 million Facebook users being compromised by hackers last September and Google+ revealing that they exposed over 500,000 sensitive records due to a bug in the system over a three year period, it’s no wonder that users are concerned about the safety of their data. After repetitive data leaks, Google even announced that they would shut down their social media platform for good in April 2019, which goes to show that trust and attention are still the Holy Grail of Marketing and the make it or break it factor for companies in the Digital Age.

Privacy laws are changing to protect personal information but new legislation and policies are difficult to enforce and take time to effect real change. At the end of the day, Big Tech’s business model still capitalizes on monetizing user data and insights at the cost of privacy, but as consumer awareness grows, they may be forced to pivot and rethink certain strategies.

Bearing this shift in consumer attitudes in mind (survey results show that only 13% of respondents currently trust Facebook to handle their data) it doesn’t come as a surprise that Mark Zuckerberg recently announced a change of plans. According to his statement on March 6th, the Facebook business model is going to build a ‘privacy-focused platform’ integrating Whatsapp, Instagram and Messenger and protecting messages with end-to-end encryption meaning that Facebook, in theory, wouldn’t be able to read their contents. This move could significantly increase user trust as over one third of respondents said they would trust Facebook more if they used end-to-end encryption. End-to-end encryption definitely has the potential to significantly address user concerns – but will it be enough to redeem Facebook in the eyes of the public?

In light of the most recent scandal about millions of Instagram passwords being stored in plain text, maybe not; over two thirds said they don’t believe Facebook will actually take necessary security measures to improve the safety of their data. In other words, the public doesn’t have much faith that Mark Zuckerberg will follow through on his promises. 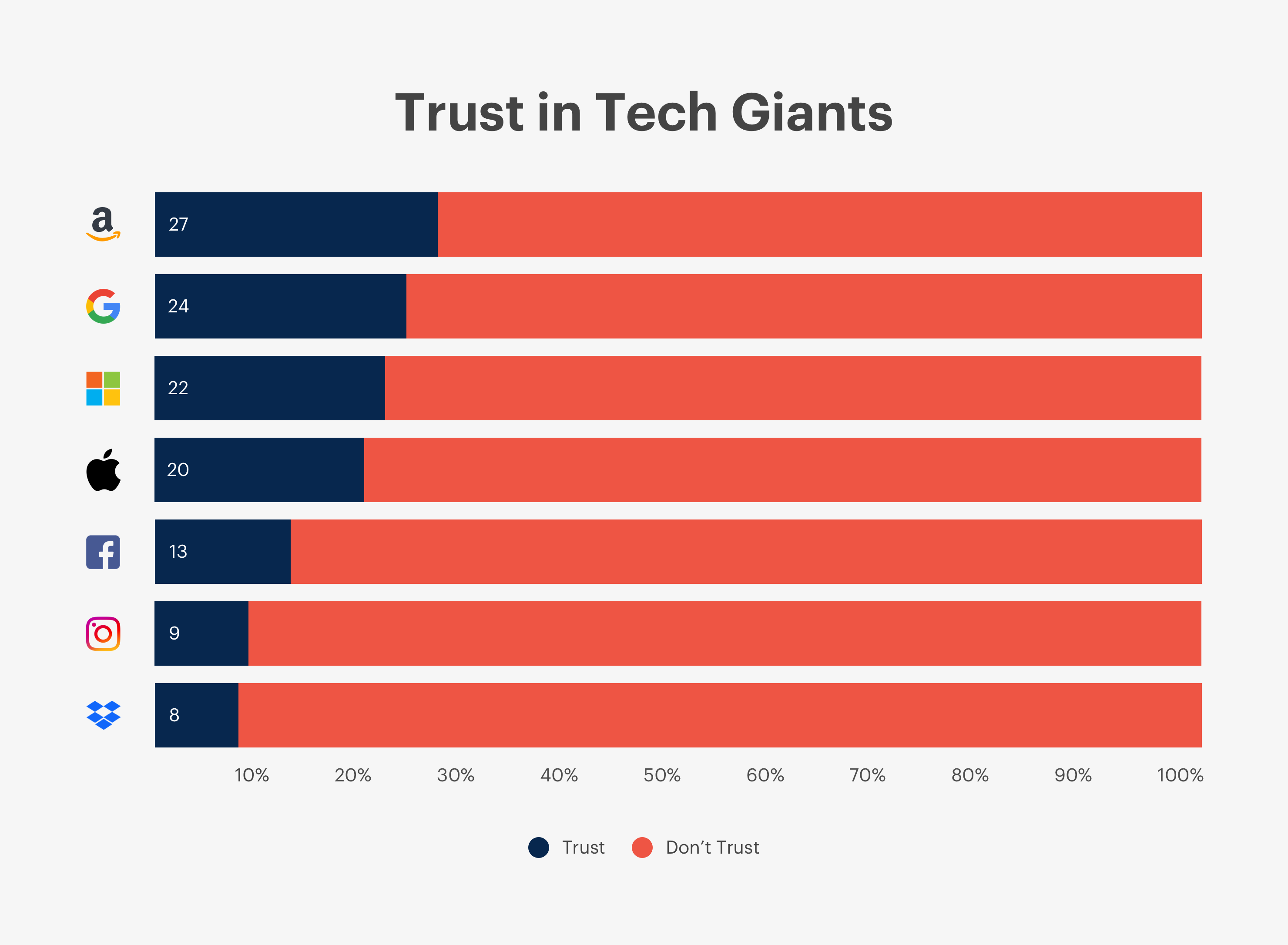 If that wasn’t enough, just because the message contents will be encrypted, doesn’t mean that Facebook won’t still monetize information surrounding user behaviors on the platform. While they wouldn’t in theory be able to access the contents of user messages, they can still get significant insights from the metadata attached to those messages, related to who users speak to, how often and when, and sell those observations to other companies.

Let’s explore the encryption angle further. End-to-end encryption, or E2E encryption, means that the encryption and decryption of digital information is done on the client’s device and only accessible to them and those they authorize. Two thirds of respondents agree that E2E encryption can help to protect their digital privacy, indicating that cybersecurity is indeed a consideration for consumers. However, there is a big difference between companies implementing E2E encryption as a “band-aid” at a late stage in the game and those whose product is built on prioritizing user privacy. Instead of waiting for tech giants to change their business model from exploiting user data to protecting it, consumers may find that trying already existing privacy-friendly alternatives is a better option.

Trust in many digital giants is definitely broken but encryption technology shows the way forward and for those looking to take back their online privacy sooner rather than later, there are alternative options. Nearly half of the individuals polled in the UK are already using encrypted messaging services; secure email, file-sharing and even online storage solutions are out there too, waiting to help safeguard their clients information.

Interested in finding out more about services which prioritize your privacy and the safety of your online data?

*Unless otherwise stated, all data are provided by YouGov Deutschland GmbH. 2307 respondents from the UK and 1273 respondents from the US participated in the survey, which took place between the 03.04.2019 and the 05.04.2019. The results were weighted and are representative for the age 18+ population.